“Every two seconds across the globe a girl is subjected to a forced marriage.”

“Every two seconds across the globe a girl is subjected to a forced marriage.” 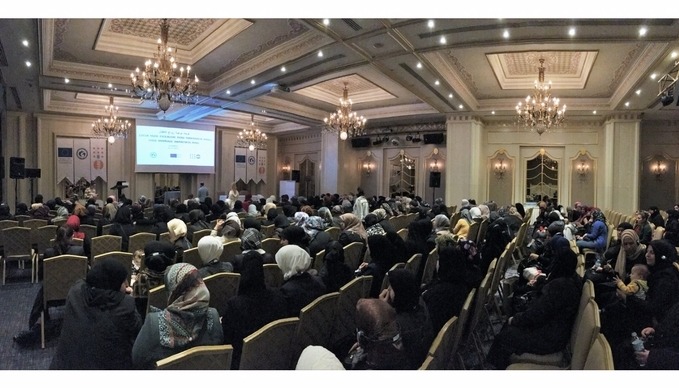 The series of panels has the aim of raising awareness and drawing attention to child marriages, a serious human rights violation against children, also a practice widely spread as a significant problem among refugee families in Turkey. In the panel, experts made presentations on Physical, Psychological and Social Dimensions of Child Marriages, Legal Status and Obligations in Early Age Marriages in Turkey and Child Marriages from Islamic Perspective.

Ece Beyazıt, Project Coordinator from the Association for Solidarity with Asylum Seekers and Migrants (SGDD-ASAM), said in her opening remarks: “Due to a marriage at early age, every year thousands of children cannot continue their education, being deprived of the of basic rights they have as children and losing their lives as a result of pregnancy in early age. We know that the first step in the attempt to combat child marriages comprises precise identification of the problem and creating consciousness in this sense. Women should play a pioneering role to overcome this serious problem.”

In her introductory remarks, Duygu Arığ, Regional Programme Manager in United Nations Population Fund (UNFPA) Humanitarian Aid Programme, said: “A child marriage is a human rights violation, one of the most serious violations heavily offending and hurting an individual. The decision to whom and when to get married should be a decision an individual takes in freedom without any fear, persuasion attempt or coercion. A decision to get married is not only a decision one should take when one feels oneself ready for it, but it also requires that the individual in question should reach adulthood ages.” Adding that public opinion, international institutions, community leaders and especially the civil society have to work hand-in hand to prevent child marriages, she said: “To this end, we, as the United Nations Population Fund (UNFPA), work together with our public and non-governmental partners to protect the human rights girls have, contributing to the efforts made towards developing policies, programmes and legislations intended to prevent that children are married at early age’’.

Süreyya Turan, Istanbul Bar attorney and Women’s Rights Centre Coordinator, who made a presentation in the panel on Legal Status and Obligations in Early Age Marriages in Turkey said that a definition as child brides is unacceptable, and that these marriages arranged without the consent of children should be defined as “forced marriages”. In her presentation Turan further said: “Here, you are subjected to the laws in Turkey like everybody else. What does this mean for you? You can exercise the rights indicated in laws. Our laws stipulate important regulations to protect women. What is important here is that you become aware of your rights and have the courage to defend them. For instance, if you witness that a child is married at early age, you have to report it; otherwise you also commit an offence. It is therefore of great significance that you are conscious of your rights stipulated in laws and do exercise these rights’’.

Further mentioning important points regarding this serious problem, Süreyya Turan went on to say. “The İstanbul Convention defines the violence against women in a clear and precise way as a violation of human rights. It does not only involve physical violence. Threats, economic restrictions, psychological pressure, any kind of verbal abuse are all types of violence. The Constitution rules that women and men have equal rights. The responsibility to enforce and ensure the protection of this equality of woman and man stipulated in laws lies with the state. As also defined in laws, men have no superiority. Someone who gets married with a girl under 15 years of age can be punished with imprisonment from 8 to 15 years pursuant to our laws. Such a marriage is a serious offence that is regarded as sexual abuse as well. The families of both parties that permit such a marriage are also deemed to have committed an offence.”

At the end of her speech, Turan underlined the consequences of child marriages also making a call to the refugees attending the event: “Child marriages dynamite the life of those girls, blowing their life to bits. Say ‘stop’ to child marriages to provide them a hopeful future; do not keep silent and fight vehemently against those who force their girls not yet in full age to marry. Education is the best way to empower girls; let them continue their education. Do not ruin their future by marrying them at early age. Protect your rights, protect your girls!” Nesrin Semiz from Başkent Women Platform made a presentation in the event addressing Child Marriages from Islamic Perspective. “We must look at the Holy Quran to understand the perspective of Islam on this problem. Quran contains no rules about child marriages, but provides several guiding principles over marriage. Islam lays great emphasis on human life and never does accept child marriages that inflict great damages on the life of individuals. Islam is a religion that requires the establishment of the conditions that would work for the benefit of human communities. It strongly opposes bearing a child by an individual who has not yet reached physical maturity. Islam does in no way approve child marriages posing lethal risks for human life. Do never consider a marriage as a solution for your problems.’’

Further informing the women participating in the panel, Nesrin Semiz said: “In any case, you are better aware, as adults, of the responsibilities which a conjugal relationship imposes on individuals. Do exert your best efforts to enlighten your girls who are not yet conscious of this fact. It is not possible that a marriage concluded to escape problems, be it financial or spiritual, brings about well-being. A decision to get married requires maturity. It is unfair to expect that a girl in early age, herself still a child, to bear and care for an infant. Islam never approves of such a circumstance. Islam requires equality in marriages, equality in terms of age, in terms of maturity and also in terms of social conditions. Some among you might probably have been forced to get married in early age, directly experiencing all the problems which an early marriage causes; in this sense, please do not let that your girls have to live through a similar experience’’.

Prof. Dr. Selma Karabey, academic at the Department of Public Health of İstanbul University’s  Çapa Medicine Faculty who contributed to the event with a presentation on the Physical, Psychological and Social Dimensions of Child Marriages said: “We must look at the whole picture with special focus on the health of the mother and that of the infant. Stephanie Sinclar, photographer artist, brings to light the widespread negative implications of child marriages through the art of photography. She aims at raising consciousness of child marriages through photographs she takes around the world. Every two seconds across the globe a girl is subjected to a forced marriage. Nowadays, 700 million girls have so far been married before they have reached 18 years of age, of whom 233 million being even under 15 years of age.  Stating that girls who get pregnant in early age have to face various health problems which can also have fatal consequences due to their immature physiological structure, Dr. Karabey added: “The age and development level of the mother is of great importance. We observe that mothers and infants do encounter serious health problems in pregnancies occurring in girls under 18 years of age. Premature delivery is widespread in such pregnancies, making it difficult for new-borns to survive.’’

A Syrian woman, one of the refugees attending the panel, also spoke, sharing her experience with respect to early marriage. She said that she was married at the age of 13, and that she now has a son of 23 years of age. Mentioning that she is the one, among panel attendees, who was married at the earliest age, she said that she alone had to shoulder all the difficulties arising from the marriage to which she was forced at early age. “The one I was married with was the boy with whom I used to play ball in the street. We both were children, and on top of that we toiled to raise a child’’ she observed, ending her speech.